I participated in Swiss Python Summit today, where I gave a talk about “Python’s guide to the Galaxy”. Code and slides are available in my GitHub. All the talk were recorded and they will probably be online within a few hours \ days. 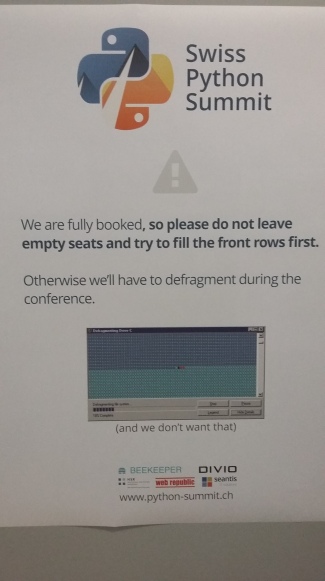 Beside the best signs I can think of the program was great and very diverse in the topics – music, 3d graphics, astrophysics and so on. Even the order of the program was very good – super cool talks after lunch to keep everyone a wake. The speakers were also relatively diverse – 4 out of 9 speaker were women, different backgrounds, etc. Unfortunately there were only few women in the crowd.

I was very lucky to give the first talk so I could then concentrate on the other talks. One very strong point of the conference was the diversity of the talks.

The second was “API Design is Hard” by Dave Halter, creator and maintainer of Jedi. It was more conceptional talk then a technical one which was enriched by lessons he learned creating and maintaining Jedi.  I believe this is an important talk regardless the specific programming language.

Next session opened with Armin Rigo talking about CFFI – “C Foreign Function Interface and PyPy interrupter. Interesting datum – CFFI is currently ranked 23rd by PyPI Ranking above Django and aws cli. Probably thank to the fact that it is integrated in Cryptography package and others. Pypy – is a python interpreter written in Python (rather then in C comparing to the most common implementation) and is designed for speed optimization.

Martin Christen had 3 parts to his talk. First he talked about 3d modeling with Blender, then he introduced some more low levels possibilities for 3d modeling and he ended up introducing some of the many open source projects he works on. Those projects mostly involve open 3d maps and globe maps.

After lunch came Matthieu Amiguet, co-founder of Les Chemins de Travers showed how you can manipulate sound using the relevant packages. This was really outstanding and non standard talk. One of the packages he currently uses is pyo.

Next talk  was given by Chihway Chang from ETH Zürich who spoke about ” Coding / Decoding the Cosmos – Python application in Astrophysics”. As she said, and I fully agree – “Python is everywhere in science today”. She talked about the found usage of Python in her department, both in Astrophysics dedicated packages (Astropysics) and using more general purposes packages (SciPy, Numpy, pandas) and packages they write themselves. She presented 2 issues they work on – mapping dark matter and calibrating radio telescope with drone. I strongly suggest to see at least a second part of this talk to original scientific thinking. 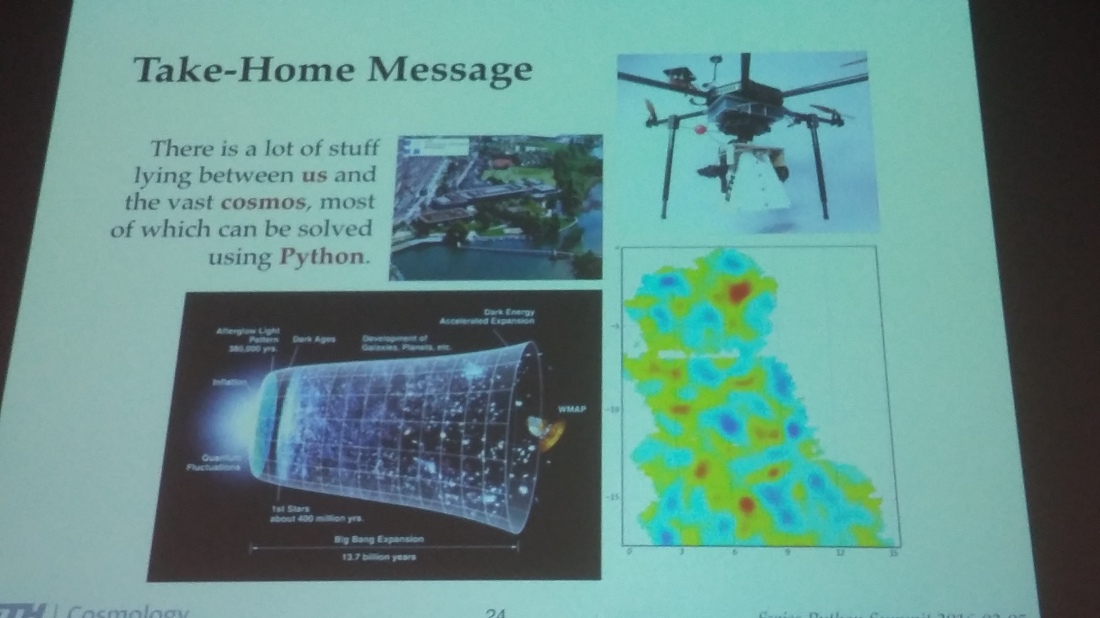 Michael Rüegg demonstrated a Scrapy pipeline which start in crawling running races results and ends up in elastic search. This was probably the most technical talk of the day and the concrete project was of additional interest for me.

Jacinda Shelly showed us how magic is done, live coding. Specifically speaking about magic functions in IPython and other cool features.

Last but not least, Florian Bruhin speaking about why and how we should use, how we can expand the basic functionality and so on. In addition he also spoke about other projects he is involved in: qutebrowser – a python browser and tox – a generic virtualenv management and test command line tool.

This is the first edition of the conference and for me it was super interesting and I really loved the mixture of the talks. Hope to be there again next year.

View all posts by tom